A reader says people should adopt pets from a shelter, not buy them from pet stores. Other topics: video games, the kite festival and an inspiring story. 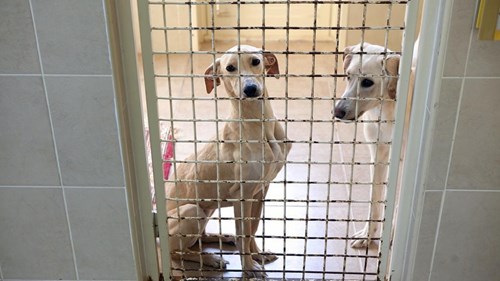 A reader says people should adopt pets from a shelter, not buy them from pet stores. (Silvia Razgova / The National)

Shelters are overflowing with abandoned and irresponsibly bred and purchased dogs and cats but many people still go to pet shops to buy a purebred animal.

They do this because they desire a certain breed or “look”. Then they get bored with the animal or it gets too big and they abandon it.

It would help all round if potential owners looked at taking on an animal as an unselfish act, rather than as an acquisition that fulfils a materialistic whim.

I am writing in regard to Abused puppies found in desert ‘lucky to be alive’ (January 30).

The dogs certainly were lucky they were found and taken care of.

There are so many pets that are left to die by their owners when no more needed – for many absurd reasons.

I really wonder how educated people can do this.

What upsets me is not only that the puppies were abandoned, which is bad enough, but the fact that they were obviously tortured for fun.

I can’t believe that the debate about the correlation between video games and violence is still raging on.

The article Video games: harmless fun or danger ahead? (January 29) does not give credit to the merits of online play and the problem-solving skills that users can acquire if they play these games.

There are games that improve hand-eye coordination, and the creative inspiration that one can gain from video games should be recognised. It is not just a “zombifying” experience.

Obviously, it is the parents’ responsibility to monitor what their children absorb on a daily basis. But I think they should not completely rule out an experience that can enrich their child’s life in terms of creativity, instil the idea of working together to solve problems and allow aggression to be vented digitally rather than in the real world.

Of course, a child might play a game that relates to war and conflict and this might make him or her aggressive. But it is equally possible that it might instil the aspiration to join the police force or the army to protect their community and country.

There are negative and positive aspects to everything. Consider both sides before coming to a decision.

A telling tale of two countries

I agree with your editorial, Singapore and UAE are already in sync (January 29).

I have lived in the UAE and visited Singapore twice, and I think the comparison is a good one.

Both countries are transport hubs, both have good infrastructure, and both are well positioned for trade and tourism. They also offer safety to residents.

Festival is not just about kites

The Kite Festival is unique (Kite-flying enthusiasts turn out for Dubai festival, January 29).

It is pure delight to see kites of different shapes and sizes in the sky. But what’s also very good is the food at the festival. The food stalls sell some of the best finger snacks and appetisers I have tasted.

I refer to Money & Me: Dubai businessman learnt lessons from near-bankruptcy (January 24).

It’s very obvious that Sassan Dieter Khatib Shahidi’s success can be attributed to his attitude to business, personal needs and money.

He is not materialistic because he has learnt an invaluable lesson. He has changed the way he looks at money and material things.

I am hugely encouraged by this story, as I had some dealings with this company at the time it was in the process of downsizing.

Congratulations to Mr Shahidi for his company’s achievements.

His story is a great inspiration for people who have lost hope and are focusing on the wrong things.