An ailing mother saluki and her seven new pups are among the hundreds saved, cured and put up for adoption at the capital's new animal shelter, run by the Abu Dhabi Falcon Hospital. 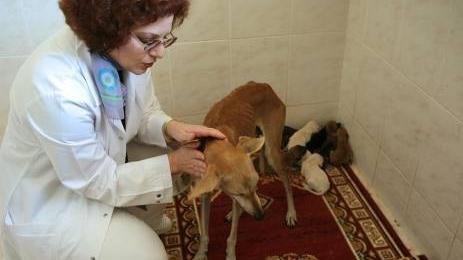 New mum in good hands: Dr Margit Muller with the saluki and her litter of seven at the new Abu Dhabi Animal Shelter.

ABU DHABI //Doctors feared it might be too late for the emaciated saluki that arrived with her litter of week-old puppies at the Abu Dhabi Animal Shelter last month.

"She was just bones and hair," says Dr Margit Muller, the director of the new government shelter near Al Shamkha, as the saluki guards her seven sleeping little ones.

"But she's already gained some weight back and she's a very, very pretty mama."

A few doors down, an enthusiastic miniature pinscher is recovering from treatment for a burn that left the flesh on his back exposed.

The shelter, managed by the Abu Dhabi Falcon Hospital, takes in animals from the capital, Al Ain and the Western Region, provides medical care and finds homes for pets. It opened officially this summer and has already been responsible for the adoption of more than 164 rescued and abandoned dogs and 54 cats.

In contrast to this week's shocking case of a cat that was shot 12 times with an air rifle, the shelter is evidence that many people in the Emirates care profoundly for animals.

At the four-day Abu Dhabi International Hunting and Equestrian Exhibition, 35 dogs and 27 cats were adopted.

"These are animals that had bad experiences," Dr Muller says. "They've been starving, maybe beaten. They appreciate having a nice family to go to. They want to get love and they want to give love."

The pets, which are spayed or neutered before adoption, are available for free but new owners must pay for required vaccinations.

The shelter has a "no-kill" policy, which means it only puts down those animals that are vicious or seriously ill. Less socialised dogs are placed with families that need guard dogs or farm pets.

Fahad Al Badi, 28, an Omani technician who has worked at the Falcon Hospital for a year, says the community at the shelter feels more like a family than work.

"I get to play with animals all day. It's nice," Mr Al Badi says as he struggles to corral Tommy, a longtime feline resident and shelter favourite, back into her room.

"These are all my pets and I want to make sure they find good homes."

Since its unofficial opening in January the shelter has welcomed a steady stream of animals, including some unexpected visitors.

A rabbit was quickly adopted and popular western dog breeds including German shepherds, golden retrievers and English bulldogs have all taken up residence in the kennels.

Pure-bred animals also turn up at the shelter, a rarity for rescue animals.

"People can find everything here," Dr Muller says. "We never know what will come."

The shelter, created by a decree from the Executive Council last year, can accommodate up to 300 dogs and 200 cats, and is the only authorised facility in the emirate.

As many as five dogs can arrive each day at the sprawling complex off the Abu Dhabi-Sweihan highway.

The shelter's success led to the closure last month of the volunteer-run Strays of Abu Dhabi (Sad), which worked to find homes for rescued animals.

"A lot of people, when they're looking for a dog, they want a lot of choices," says Sue Stuart, the former co-director of the organisation. "It just became people's first choice to go there."

The number of adoptions through Sad had been dropping, Ms Stuart says. "But the most important thing is that there is a place with the resources to take care of the animals. This was badly needed in Abu Dhabi."

Dr Muller says volunteer opportunities have been discussed but not yet finalised. Ten staff members work at the shelter and pet-care centre, where all animals are given a clean bill of health before they can be adopted.

The care centre was expanded during the construction of the shelter, and more surgery and intensive care rooms were added.

Animals cannot be adopted until they are eight weeks old.

Many cats are returned to the streets once they have been neutered to help reduce the pest population.

The animal shelter has set up a website where residents can make requests or search the available animals.

"We want to encourage people to take the animals but they have to know we are not a pet shop," says Dr Muller. "We must ensure that they will have a good life after."