Call for Adihex to do more for conservation 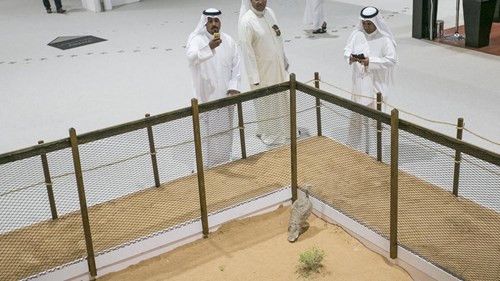 Adihex should do more to promote conservation of wildlife such as the houbara bustard, above, experts say. Mona Al Marzooqi / The National

ABU DHABI // High-profile events such as the Abu Dhabi International Hunting and Equestrian Exhibition (Adihex) could be used to raise awareness of animal welfare and conservation issues, experts said.

Mohammed Saleh Al Baidani, director general of the International Fund for Houbara Conservation (IFHC), said events such as Adihex were key to communicating a message of conservation to the public.

“The IFHC has dedicated its efforts since 2006 to creating a sustainable population of houbara,” Mr Al Baidani said. “Platforms such as Adihex are key to bring people closer to the houbara and the importance they hold to local culture.

“It’s also a great opportunity to showcase the wonderful work carried out by the IFHC in terms of its conservation efforts.”

The vet, who is also the director of Abu Dhabi Falcon Hospital, said advantages of taking a shelter animal include the fact it has been vaccinated, neutered and wormed, and had any health issues treated.

The shelter also pairs animals and people together, finding out about a potential owner's lifestyle, family and other pets.

"We try to match the animal with the correct potential owners. It reduces the risk of abandonment," Dr Muller said.

The shelter was created by a decree from the Executive Council in 2010.

Margit Gabriele Muller, director at the Abu Dhabi Animals Shelter, which had a stand at Adihex, said the event was the ideal place to promote animal welfare.

“It has a huge audience, not just from the UAE but also from the Gulf and across the world. We can utilise this opportunity to show how to take care of animals.”

The Abu Dhabi Animals Shelter pavilion was busy throughout Adihex, with many visitors expressing an interest in adopting an animal, said Ms Margit, with 24 dogs re-homed in just 24 hours.